A Lobi couple of Pessare Dah

A Lobi couple of Pessare Dah, 1949 - 1995, was a carver we identified on 2010 by name; The eye and nose areas of his statues exhibit a close relationship with the works of Sikire - the eyes are also often burned (or bored) in. As a balafonist he travelled around a lot and could have known Sikire or his works; Thomas Keller, Sikire Kambire, 2015, page 47. Like Sikire Kambire Pessare Dah was born in Gongonbili and lived later in Tankoura, about 8 - 10 km from Loropeni. In contrast to Keller, I suppose he wasn´t known personally to SK, because he was a young boy of 14 years when SK died in 1963 in Gaoua and at that time Pessare was still living at Gongonbili, but obviously, he was sustainably influenced by the SK sculptures in his early works. The enclosed sculptures belong to the last creation phase of Pessare, in which his style became more individual and less influenced by Sikire. A second phase shows a transition from the first to the third phase and was close to the sculptures when we identified the carver's name in 2010 and saw to small sculptured still on the property of a villager of Tankoura. Although these sculptures have traces of ritual use Pessare worked - similar to SK - also for the Western market, like a four-leg stool, which remains more to well-known "Tansania chairs" than the typical Lobi stools we collected.

Some reflections about Pessare Dah 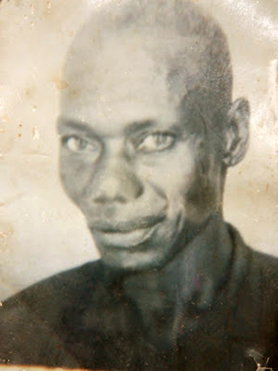