"Standing figure with mitre-shaped headdress, high collar, neck ornament of leopard teeth and breast bell, the upper part of the body is covered with a leopard skin, he carries a short curved lance in his left hand and arm cuffs on both arms, the apron is richly decorated. Very good casting with exceptionally well worked out details, such as the coral rows of the headdress, the leather stripes underneath the leopard skin and the braided band motifs on the apron. The neck cord with leopard teeth as well as the leopard skin on the head indicates that this is probably an army commander.

Due to the formal elements and comparisons with known similar representations in museum possession and above all the expertise of the laboratory expertise of the analytical laboratory AVENTIS, the figure can be described as an original Beninguss from the 17th century." 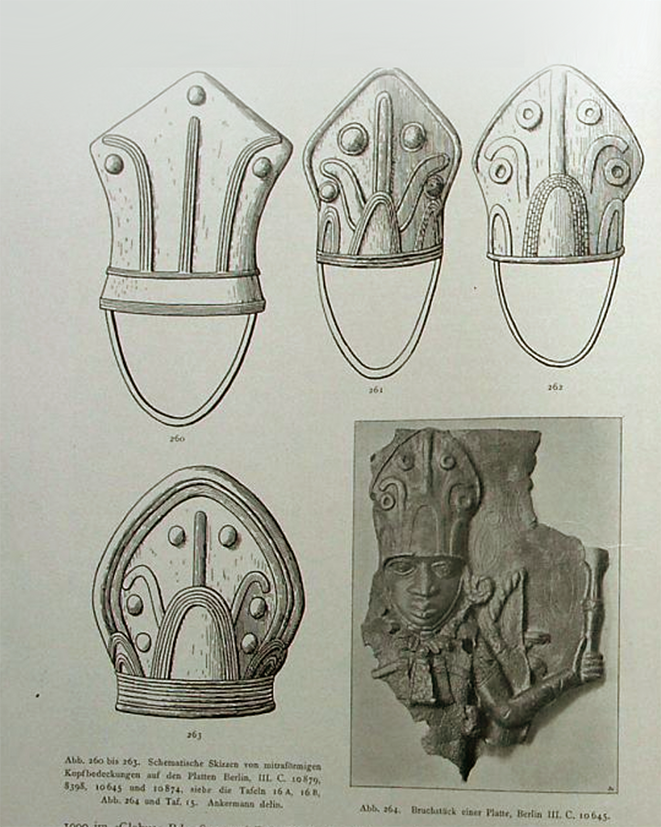 This object can be visited during the auction in the Gallery Wolfgang Jaenicke. It will not be sent and can only be picked up. After the end of the auction, the highest bidder can have the object for further analysis by its own account without significantly affecting the object in its substance. For this analysis, the winner of the auction has a period of 14 days. The object is from an old African Collection. Restitution organizations and individuals who are intensively concerned with restitution issues were informed about the object. See also Cultural Property Protection Law (Kultur Gut Schutz Gesetz - KGSG).

According to the UNESCO Convention of 1970, a claim for repatriation expires one year after the authorities of a country of origin have learned where and with whom a cultural object is located. Wolfgang Jaenicke Gallery therefore always informs about every newly imported object. Especially about the bronzes from Nigeria shown on this page, which are published in the internet and are accessible to everyone. Organizations dealing with restitution issues, but also freelance art historians employed by the state, such as restitution experts like Benedicte Savoy, are regularly informed about objects in the Galerie Wolfgang Jaenicke. \n \nEvery buyer of an art object, regardless of whether it is made of wood, terra-cotta or bronze, must be aware that from a European legal perspective, traditional African art usually came from the respective African country of origin with insufficient export documents. Galerie Wolfgang Jaenicke, Berlin, tries to do justice to this dilemma by acting with the greatest possible transparency. The export policy of African states is problematic for art historical research since African and European dealers usually work covertly due to diffuse legal situations and important information that was passed on from trade to science before 1970 tends to be lost. \n \nIn case of uncertainties, please contact the managing director of Jaenicke-Njoya GmbH, Wolfgang Jaenicke. It is in the interest of the gallery to clarify any questionable situation with all available means.